One of the most enjoyable parts of raising a young child again (13 years after the first) is that I get to indulge in children’s music again.  Not the boring, repetitive junk food type music that often dominates the marketplace but heart-filled music that appeals to audiences of all ages.  I have to say I’ve become a big fan of Justine Clarke in recent times.  Her songs are so addictive!  But I’m also lucky enough to have an old uni friend, Ashley Perrow who, with his band The Lamplights has come up with a catchy song that has mesmerised the kids of the Gold Coast. The Hopping Mouse is the song I’m talking about. Have you heard it yet? 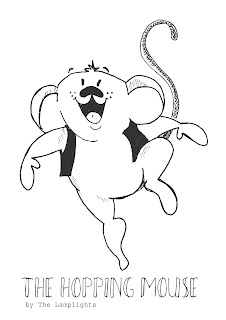 My friend Ashley Perrow (acoustic and lap slide guitar) joined forces in a with Ryan Gittoes on vocals, (in another example of the six-degrees of separation theory, Ryan is also the partner of a good friend and colleague of mine) Jason McGregor on acoustic and electric guitar, Mattie Barker on vocals, harmonica and bass, and Mick Easterman on drums.  What a band.
The Lamplights debuted on the music scene in 2009 and have been engaging audiences, young and old, at festivals, and on-air since then.  They play all kinds of venues and events and Ned and I can often be found in their audience, listening to their magic kind of music.  (My favourite song is Practise.) They rock, but never more so than when they play Hopping Mouse!   You should see the mass of young children jump up when they hear the first notes of the song.
These guys should make more music for children.  Don’t you agree?  Why not petition them???
Pop on over to The Lamplights page to have a preview listen for yourself.
LIKE them on Facebook too.
That will make their day!

14 Responses to “The Lamplights “Hopping Mouse” song for children”